Rock climbing in the Lake District

Jonathan Manning steps well outside his comfort zone on a high-thrills mountain climbing experience known as via ferrata. The extreme activity sees him clamber up iron ladders, traverse rock faces and wobble his way across a tightrope above a 2,000ft drop. Clip in and hold on tight! 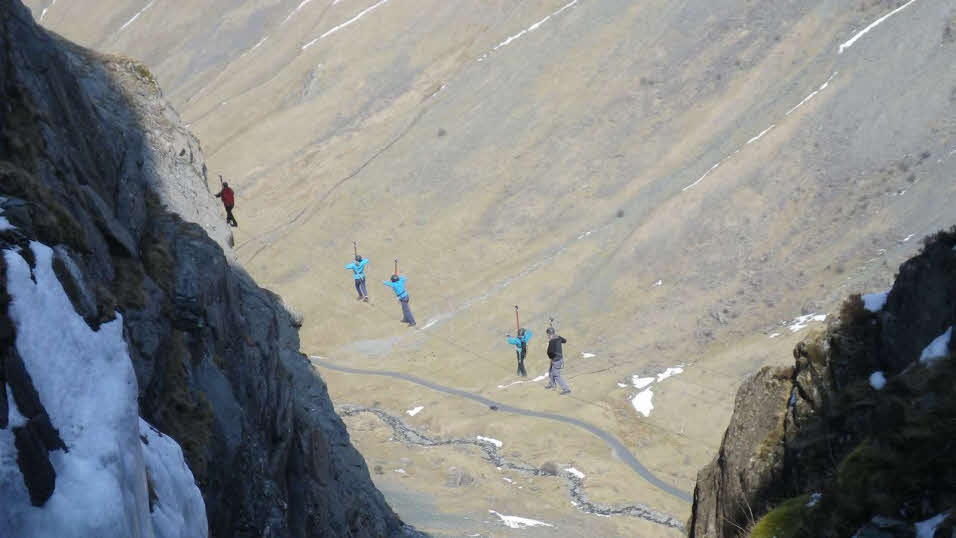 An 'Infiinity Bridge' across a 2,000ft drop really tests the nerves

My keyboard-soft hands cling to an iron rung, jaw clenched in terror, eyes stung by raindrops as I try desperately not to look down. Welcome to the realities of ‘via ferrata’.

The first via ferrata (Italian translation: ‘iron path’) appeared in the Alps in the 19th century, the concept developing significantly during the First World War as a means of moving men and military kit through the Dolomite mountains. When the conflict finished, the via ferrata infrastructure endured, a network of metal rungs, ladders and bridges bolted to the rocks, giving familiar holds to people unfamiliar with finding grip on rock faces.

Here in the Lake District, the Via Ferrata Xtreme is only seven years old and built for the sole purpose of thrilling the adventurous. Below the rungs and ladders there is a drop of more than 2,000ft to the valley floor, where ant-sized cars rev up the Honister Pass. I’m trussed up in a climbing harness like a festive turkey, with a hard hat under my hood as protection against falling rocks.

Our instructor Adam briefly explains the deceptively simple technique for using the via ferrata safely. Attached to our harnesses are two cords, each with a carabiner at the end. The carabiners clip to a cable that’s secured to the mountainside. At each junction in the cable we need to execute a one-handed manoeuvre, unclipping one carabiner and reattaching it to the next section of cable before repeating the process with the second carabiner.

Practising on the flat it’s easy. With 300-plus metres of air beneath the soles of my boots, jeopardy seems to infuse every move. The rungs fixed into the cliff are rigid, but I can’t stop myself from gingerly testing each one before entrusting it with my weight. Later, from the safety of an old mine platform, I’ll be able to admire the clouds dancing around fell-tops as rugged as a dinosaur’s spine, but right now I stare upwards into the bleak comfort of heavy clouds. 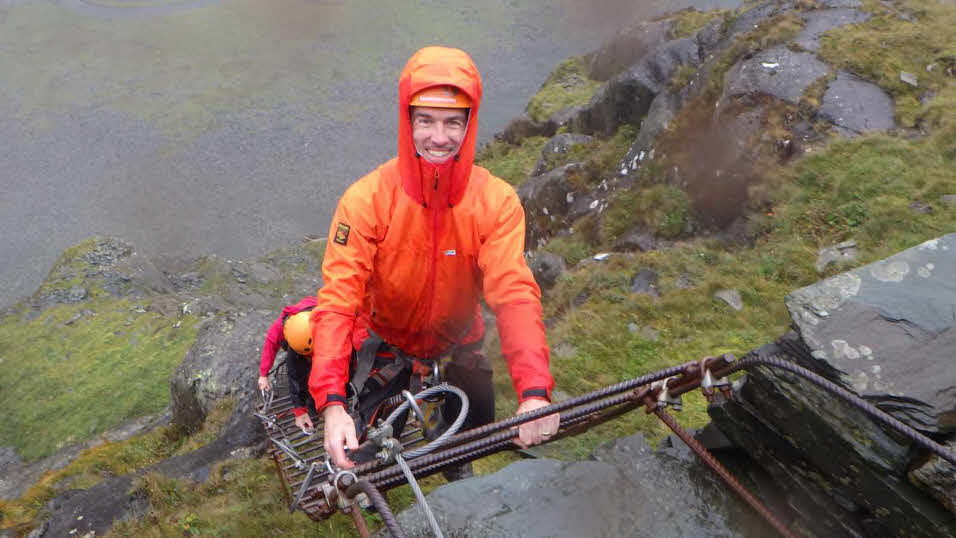 Truth be told, the ups and downs on the rungs and ladders are fine. But the traverses across the rockface are another matter entirely. My progress is slow and my concentration forensic as I cross the cliff.

Each new section of via ferrata is daunting, yet strangely moreish. “On this next stretch there’s actually an overhang,” says Adam, illustrating the angle at which we’ll be hanging from the side of Honister Crag and showing us how to hook one arm over a rung before using our other arm to shift the carabiners.

As the rock literally disappears beneath my feet and my head and shoulders hang a couple of feet further away from the rock than my feet, I begin a cautious shuffle around an outcrop. 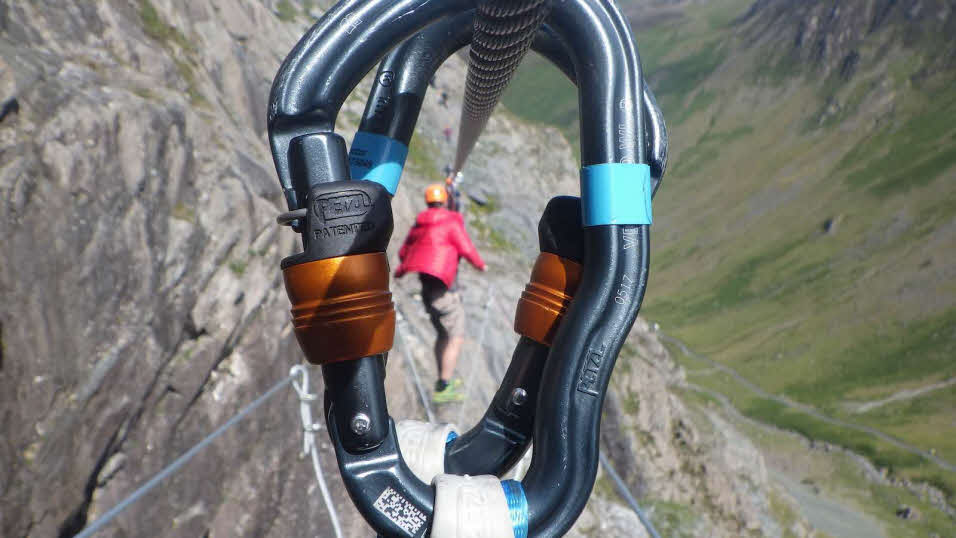 Then I see it. A 50m long tightrope or ‘Infinity Bridge’ strung out across a 2,000ft drop. It’s made of no more than a steel hawser, with two hand-height cables, and a line above to hook  onto with the carabiners. My heart jumps as the hawser swings one way then the other, bouncing with the footsteps of fellow adventurers ahead and behind. I wobble along both feet forward, eager for the quickest route to the far side. Whatever I try, my progress is glacially slow.

In contrast, the scramble up a long cargo net is quick and easy, followed by blissfully solid footsteps on Fleetwith Pike. Waves of elation wash over me. I gaze out at the magnificent view, watch spotlights of sunshine chase rain across the fells, and give myself an imaginary fist-bump.

The via ferrata has been an all-engrossing challenge, a step literally and figuratively outside my comfort zone and an experience that I’ll brag about for years. In 2020 a zipwire is due to open at the top to whizz people right back to the slate mine, just in case the rungs, rocks and bridge haven’t provided enough thrills! 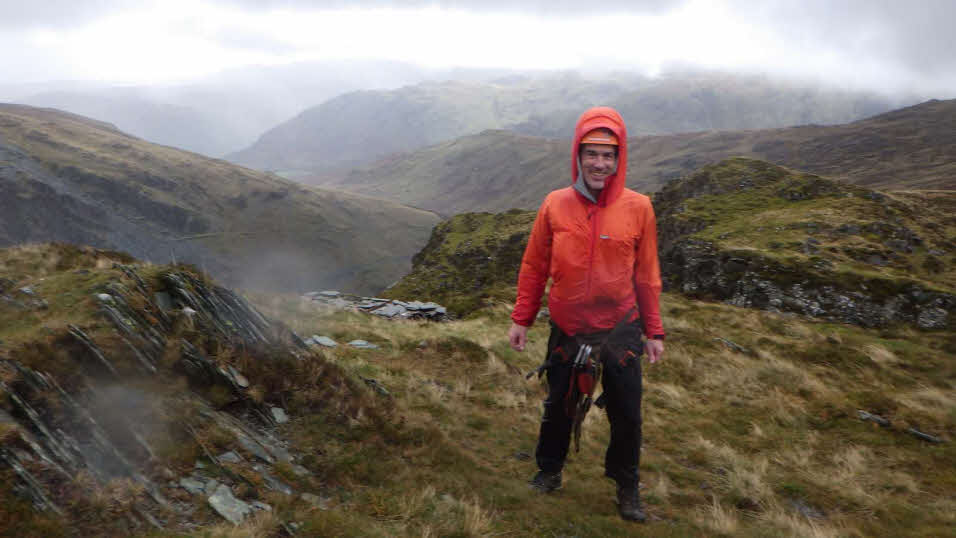 Try it for yourself!