In the latest in our series of features on activities to enjoy near Club Sites, Jonathan Manning tries his hand at fly fishing on Rutland Water. 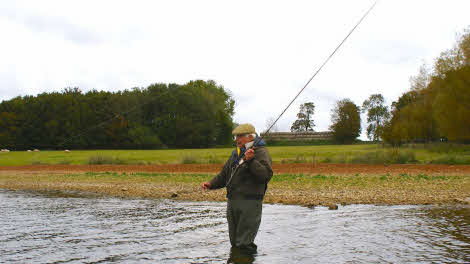 Wallop! The water swirls, there’s a silvery flash, a slight splash, and then the tip of my rod is yanked double. In an instant I understand what all the fuss is about.

Five minutes earlier, standing thigh-deep in chilly water with 11 square kilometres of reservoir before me, I had been beginning to wonder. Fly fishing had seemed quite straightforward in the classroom – how hard can it be to outwit a trout? – but wading through the shallows of Rutland Water had made the epic scale of the lake apparent. Suddenly, finding a fish felt like searching for the proverbial needle in a haystack. And why should the artificial fly on the end of my line, about half the size of a fingernail, look any tastier to a trout than Mother Nature’s bountiful buffet of pupae, shrimp, nymph, fry and flying insect? This, I supposed, explained why the sport is called ‘fishing’, rather than ‘catching’.

Last time I fished there was a 19 at the start of the year but spare time during lockdown and the search for a socially-distanced outdoor activity drew me back to the water. And I’m not alone. The Environment Agency reported in August that over 100,000 more people have been fishing this year, with rod licence sales up by nearly a fifth compared to the same time in 2019. Then there is the affect of the hit TV series Mortimer & Whitehouse: Gone Fishing, which followed comedians Bob Mortimer and Paul Whitehouse as they fished their way around the UK.

Go to Rutland Caravan and Camping

All of which leads me to a classroom above the fishing lodge at Rutland Water for a day’s course to relearn the art of fly fishing. My instructor is the kindly Peter Hartley – I so wished his initials were ‘JR’ in tribute to the old Yellow Pages advert – who swiftly demystifies what can be a baffling sport. Fly fishing, he says, uses a hook dressed typically with feather or fur, which acts as a lure to catch game fish, such as trout and salmon. Present this ‘fly’ on the nose of a rainbow trout and it will take a bite, says Peter.

“There are books and videos online explaining all sorts of details about flies and tactics, but the rainbow is basically the Labrador of the fish world – it will eat  anything,” he says, opening a box of artificial flies that range from life-like pupae, shrimp and daddy longlegs to lurid Halloween monsters.

The skill lies in presenting the fly at the right height in the water and the right speed to entice the fish. But first you need to cast, which is no easy feat given the lack of float or lead shot to carry the line. In fly fishing, the weight of the line itself has to generate the momentum for the fly to reach your quarry. 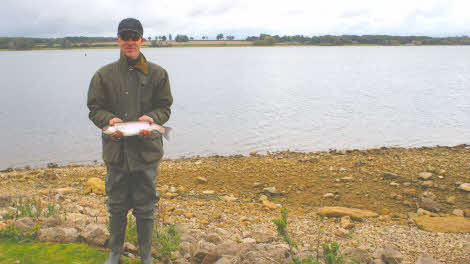 Jonathan Manning proudly shows off the fish he caught

Casting involves a metronomic whip of the rod forwards and backwards, starting with a smooth acceleration from the 10 o’clock to 12 o’clock position, followed by ‘false casts’ of short, firm movements between 11 o’clock and 1 o’clock, before shooting the line forward. In the hands of a skilled angler it looks easy;  in the mitts of a beginner it’s a whisker away from a flying tangle of knots.

Out in a grassy paddock, with no hook attached to the line, Peter counts a steady rhythm, while I snap the rod to and fro. Within a few minutes the line starts to unfurl in a smoothish arc – not nearly as far as Peter can throw it, but far enough. It’s time to go fishing.

Wading into the reservoir I’m struck by the clarity of the water and relieved that my waders are completely watertight. With the wind at my back, the first cast carries to a reed bed, the brightly coloured fly line floating across the dark surface and the fly bobbing beyond at the tip of the ‘leader’ (a length of monofilament line about the same length as the rod). Peter has doubled my chances by attaching to my leader a floating ‘booby’, which resembles a fish fry, and a sinking gold-ribbed ‘hare’s ear’ that mimics a nymph.

Trying to establish the depth at which the trout are feeding I wait five, then 10, then 15 seconds after casting before starting my retrieve, until wallop – the trout strikes, the rod bends savagely and a cocktail of adrenaline shoots through my veins. The next three or four minutes are intoxicating – relinquishing line when the fish pulls hard, and retrieving line when it swims towards me. Finally, the trout exhausts itself and Peter scoops it up in a net. That’s dinner sorted and my appetite whetted for the next fly fishing outing.

Grafham Water, Cambridgeshire One of the very finest locations for fly fishing in the East Midlands for anglers of all abilities. A beginner’s course costs £88. Info: anglianwater parks.co.uk/grafham-water-park. Stay: Grafham Water Club site