Railway rides on the Cinder Track

Former train tracks offer some of the finest, most accessible traffic-free cycling in the country. Jonathan Manning experiences the joy as he rides the Cinder Track between Whitby and Scarborough. 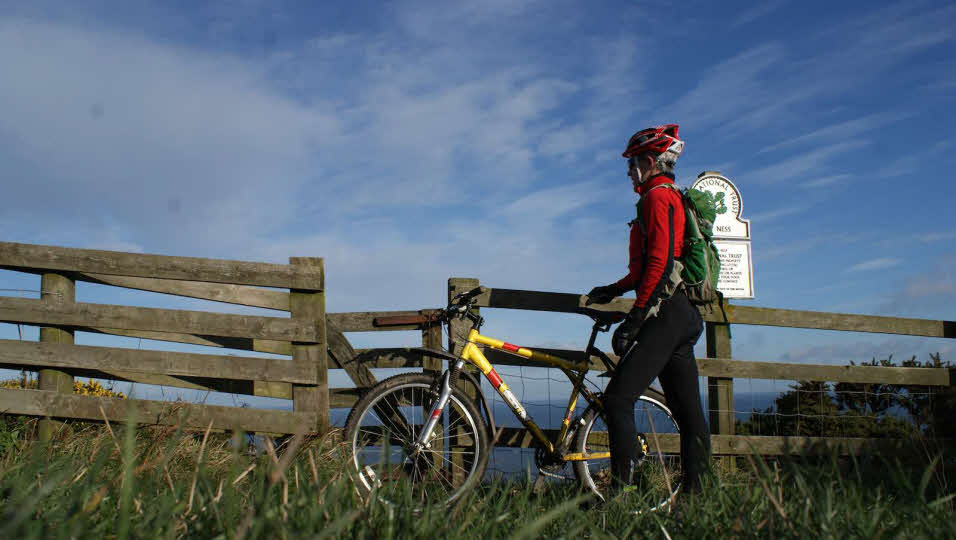 While the future of HS2 occupies the minds of railway planners, cyclists are making the most of the work of their predecessors in increasing numbers.

Back in 1885 it’s fair to assume that the engineers of the Scarborough and Whitby Railway Company never envisaged their hard work would be dismantled and converted into a multi-use trail between the two seaside towns.

The Scarborough-Whitby line fell victim to the axe of Dr Beeching in 1965, and these days it’s mountain bikers rather than steam locomotives that huff and puff along the former railway as it hugs the north-east coastline. The old Victorian bridges are draped with creepers and ivy, the former platforms transformed into seasonal cafes.

Now called the Cinder Track, in reference to the black cinders used as ballast for the old trackbed, the 21-mile trail starts modestly next to council buildings in Whitby and ends unceremoniously in a supermarket car park in Scarborough. But between its termini lies spectacular seascapes and landscapes, carrying echoes of the excited ‘oohs’ and ‘aahs’ that once spilled from the lips of holidaymakers taking a ride along the scenic line. 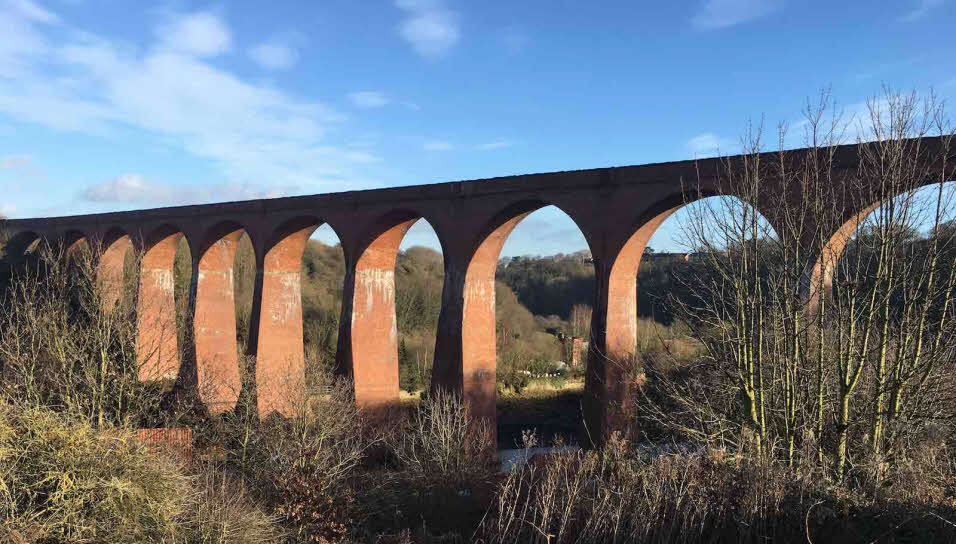 Today, the first eye-catching view involves a slight diversion from the Cinder Track to admire the 13 arches of the magnificent Esk Valley Viaduct, which towers 120 feet above the river. It’s a prime example of how the Victorians mixed pride with practicality, its 5 million bricks fashioned into architecture that refused to sacrifice form for function. Bram Stoker even referenced the viaduct in his Gothic horror, Dracula, which was inspired by his stay in Whitby.

There are no vampiric scares on the Cinder Track, where for the most part the going is reasonable for mountain bike wheels. The track turns from firm footpath to rutted road, its cinders ranging from sticky mud to axle-deep potholes to cobbles that threaten to shake fillings from jaws. A couple of years ago, proposals to upgrade more of the route were met with protests, amid concerns that a smoother surface would transform the trail into a motorway for cyclists seeking leaderboard times. While I curse the treacherous mud, the protesters were right to say that this is a route where it’s better to travel than arrive.

Supporting evidence arrives shortly after Hawsker, where the North Sea sparkles beyond lush green meadows fringed with bright yellow gorse. To the south, cliffs clutch Robin Hood’s Bay in a protective embrace but as the trail passes across the top of the village I know better than to ride down into its heart. Robin Hood’s Bay is a characterful place where buildings cling to a brake-testing slope that races down to the sea, but I can’t face the subsequent walk of shame, pushing my bike back uphill after a coffee and flapjack stop!

The detour is just one of many potential ‘branch line’ diversions that could easily stretch the ride into a full day’s outing, although it’s hard to resist the lure of coves such as Maw Wyke Hole and Cloughton Wyke (a wyke is where a boat can be landed with a path up from the beach).

For walkers, the Cleveland Way National Trail follows the full rollercoaster rise and fall of the cliffline, while the Cinder Track takes a slightly easier inland route. It is, nonetheless, one of Britain’s more challenging former railway lines to ride, gaining altitude to Ravenscar on a climb that goes on and on like the office bore. 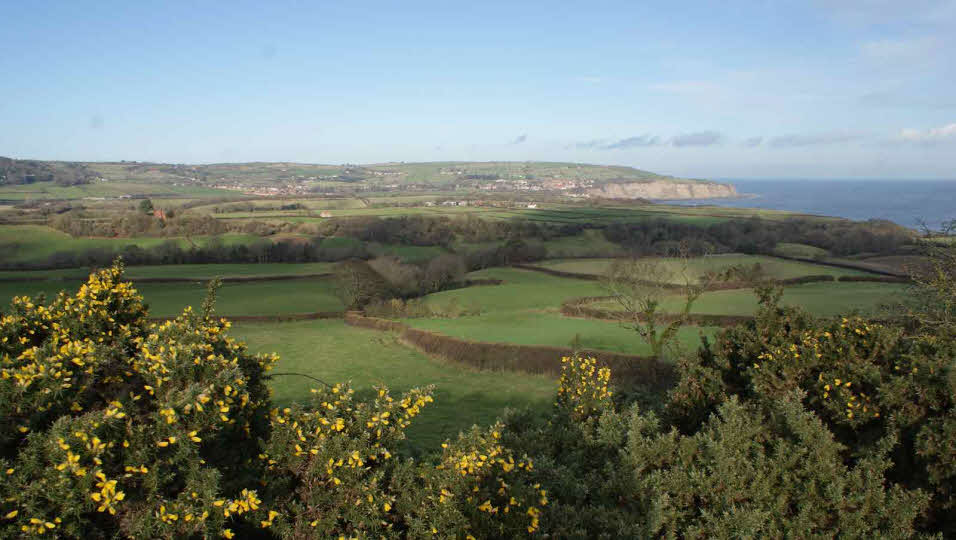 The reward for the uphill effort on the final approach to Ravenscar is a spellbinding coastal panorama that sweeps from the wind-lashed battlements of Raven Hall Hotel all the way north to Robin Hood’s Bay. The hotel is a good spot for a cuppa and cake, and its views are priceless.

Losing altitude as the Cinder Track starts its descent from Ravenscar to Scarborough, the route seems significantly quieter, which is a shame given how pretty the pebbled cove at Hayburn Wyke is, with its short waterfalls cascading into rockpools.

Railway rides can be undertaken in either direction, and there are benefits in tackling the Cinder Track from either end. Starting in Scarborough presents the chance for a mid-ride fish ‘n’ chips at the award-winning Magpie Café in Whitby. Or start in Whitby in order to pick up the prevailing south-westerly tailwind for a helpful push on the north-bound return leg. Either way, it’s 21 miles of traffic-free coastal cycling with some truly wonderful views. 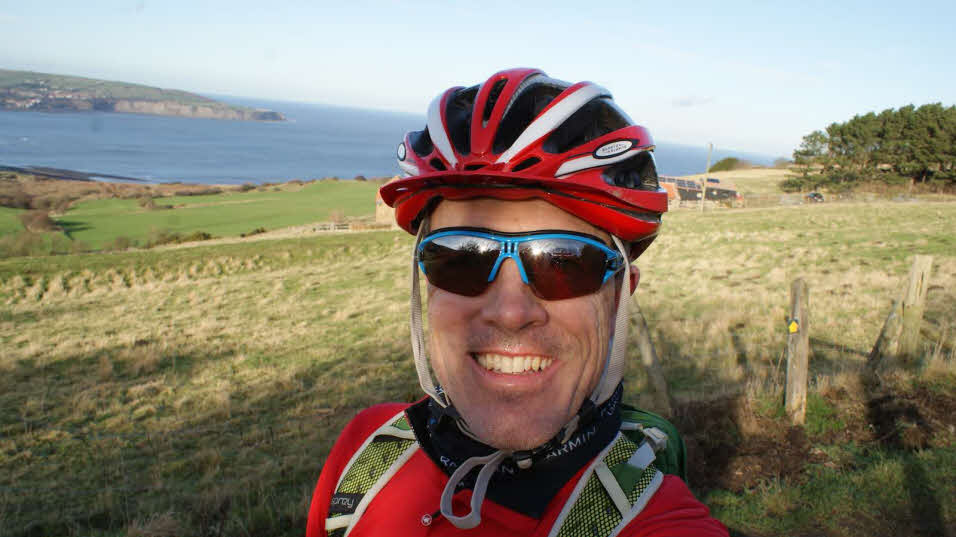 Jonathan is all smiles after cycling the Cinder Track

1. Camel Trail, Cornwall - an 18-mile track from Wenfordbridge to Padstow.

3. Bristol and Bath Railway Path - a 13-mile asphalt trail between the two ciities.