Let's get ready to ramble 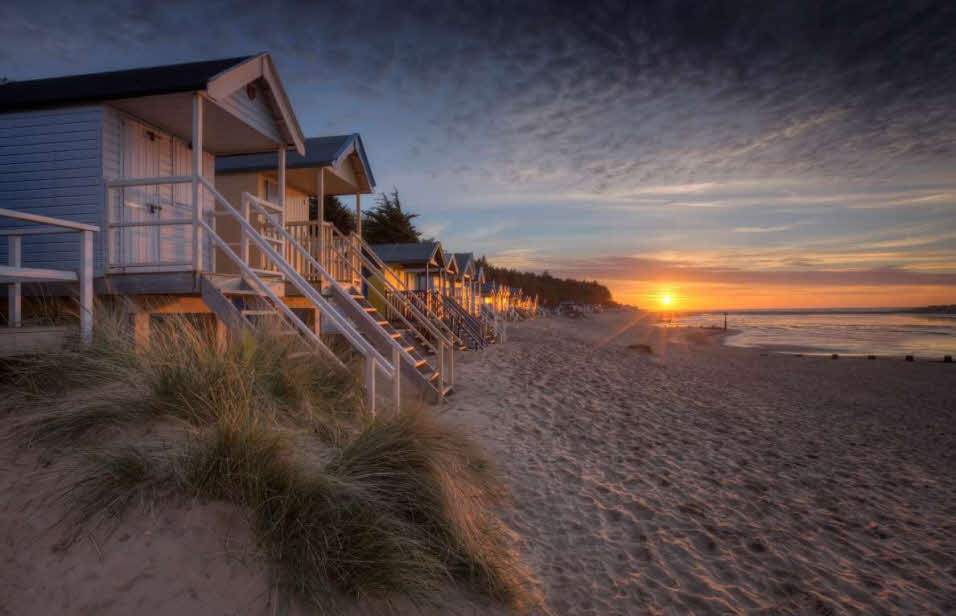 The fingerpost marks the official start of the Norfolk Coast Path, a long-distance trail that hugs the North Sea eastwards, all the way to Great Yarmouth and beyond. The original national trail ended at Cromer and my 2015 guidebook locates the finish line in Sea Palling – but the official terminus of the trail is now Hopton-on-Sea. By the time you lace up your boots, the Norfolk Coast Path may well have invaded Suffolk!

There’s a sense of purpose when you tackle a long-distance path, and a sense of satisfaction in ticking off the stages as the highlighter pen traces its way across the Ordnance Survey map. The distances may look intimidating and the landscapes challenging – the Pennine Way, for example, climbs 268 miles along the rugged spine of England – but, section-by-section, weekend-by-weekend, or even week-by-week, the tally of miles covered gradually outnumbers the miles remaining. 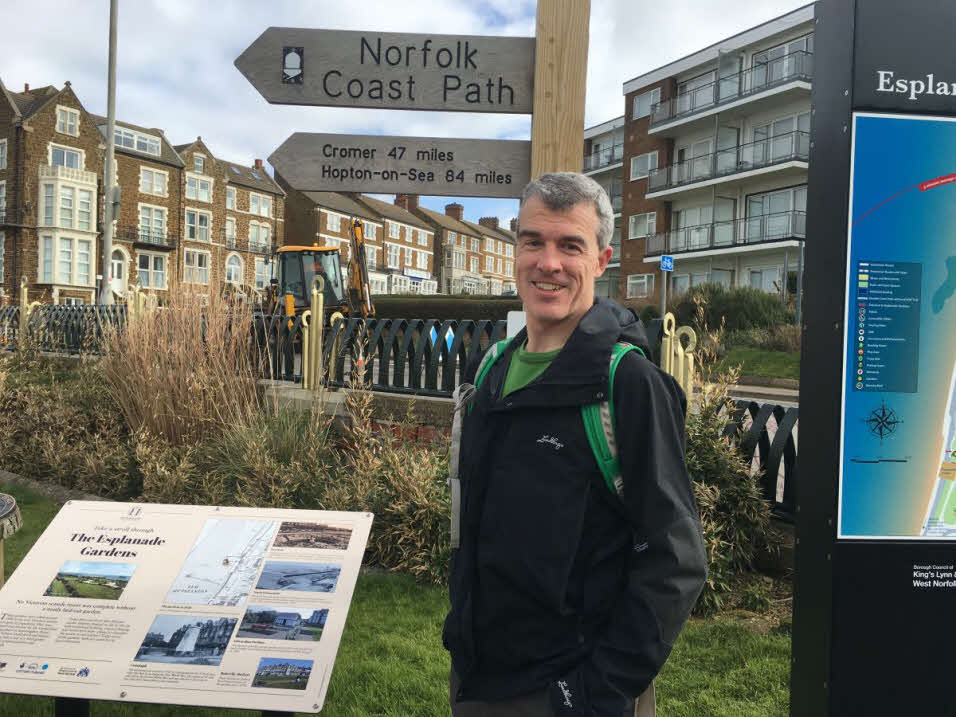 For debutant long-distance walkers, there’s no better trail to tackle than the Norfolk Coast Path. Its ‘national trail’ status means the way-marking is superb, although there’s barely any call for a map. Simply keep the sea on your left or right depending on the direction you choose and follow the path ahead – if your ankles get wet you’ve gone wrong!

Moreover, the coastline as far as Sea Palling is brilliantly served by an hourly Coasthopper bus route that whisks walkers to the start of each day’s section – or back at the end of the day. Add into the mix three Club sites (Incleboro Fields, Seacroft and Great Yarmouth Racecourse) plus a generous sprinkling of CLs to serve as basecamps and the logistics of taking on the Norfolk Coast Path are all set fair.

But the real motive to walk the Path lies not in its bus services, campsites or its ease of navigation, but in its magnificent and surprisingly varied seascapes. From the red-banded cliffs of Hunstanton to the epic sweeps of sand at Brancaster, Wells-next-the-Sea and Great Yarmouth, to the salt marshes of Burnham Deepdale and Cley, this is a walk where the scenery and light change with dramatic effect.

The sweeping sands of Brancaster beach

There’s a fabulous contrast between the buzz of small seaside villages and the wind-blown isolation of the path as it follows the tideline or clambers onto a sea wall for far-reaching views over the salt marshes.

At most points of the trail walkers are no more than a mile or two from a town or village, but civilisation feels a galaxy away below these huge skies, when it’s just the birds for company. This is five-star birdwatching territory, from the RSPB reserve at Titchwell to the reedbeds and hides of the Norfolk Wildlife Trust’s Cley and Salthouse Marshes. My binoculars re-emerge farther to the east at Sheringham’s lifeguard lookout station. It’s just 45m above sea level yet delivers views that seem to extend as far as the start of the walk.

Each day starts in the same way, clambering onto the Lynx or Coasthopper bus to pick up the path where the previous day ended. I try to keep my eyes closed during the journey to avoid spoiling the surprise of the route to come – windmills and flint-walled churches are examples of regular eye-catching landmarks. 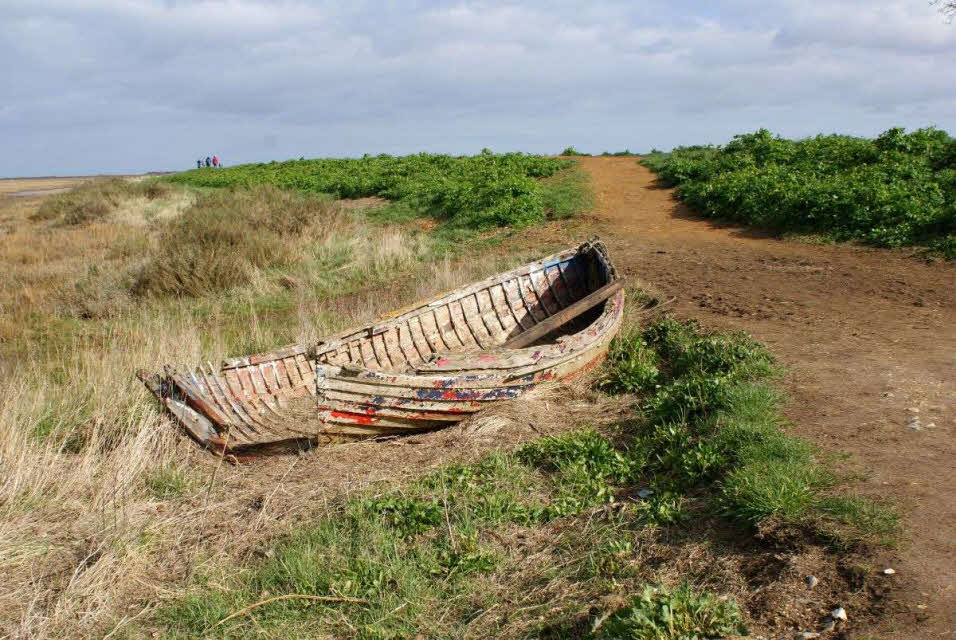 Some days the distances disappear in the flash of an eye, smooth level paths facilitating brisk progress over 15-plus miles. Other days the soft sand of Holme or the gruelling shingle of Cley and Weybourne turn seven or eight miles into a slog. At least by walking west to east, the prevailing breeze is at my back.

Wind and waves have conspired at Happisburgh to erode the coastline with alarming effect, a phalanx of giant boulders at the top of the beach attempting to protect the village from tumbling into the clutches of the North Sea. A few miles further on, rock groynes and a concrete sea wall defend Sea Palling.

After the solitude of Waxham and Horsey, the seaside resorts of Newport, Caister-on-Sea and Great Yarmouth arrive as a shock to the system. Fleets of static caravans stand on holiday parks, amusement arcades lure tourists with music and flashing neon, and gulls wheel idly by, waiting for the squeals and dropped chips of summer.

As previously mentioned, Hopton-on-Sea is the final destination for now but the government has already published proposals to extend the 'England Coast Path' from here to Aldeburgh in Suffolk, so like a gift that keeps on giving, there’s more to come from this sublime trail.

Note: Jonathan Manning walked the Norfolk Coast Path before the outbreak of the coronavirus. Please check the Government’s official website (gov.uk) for the latest travel and social distancing advice. We hope you enjoy planning your own future long-distance rambles.