A 15-mile, totally traffic free cycle route from Ferry Meadows Club site which hugs the River Nene and also runs parallel to the Nene Valley Railway for a section.

There’s an abundance of excellent bike rides straight from the gates of Ferry Meadows Club site and this one is arguably the loveliest. It hugs the River Nene and heads back in time; from the era of steam rail and then further still to the Bronze Age. What’s more, the 15-mile journey is all on traffic-free cycle paths as it heads east into Peterborough and beyond to the Fens.

The full steam attraction comes courtesy of the first couple of miles, when the route runs parallel to the Nene Valley Railway, a heritage line where, among other engines, a certain blue locomotive called Thomas plies its trade. When the trains
are chuffing, it’s worth spending a moment or two at one of the two characterful stations, Overton and Orton Mere, that sit along the bike path, for a better view of trains in action.

Farther on, the ride skates past fearless flocks of swans on Peterborough Rowing Lake, before following the old industrial way into Peterborough, as the Nene towpath passes under a series of railway bridges.

A very brief wiggle through the city centre leads directly back to the river, which makes navigation as easy as it could possibly be – just keep the river on the right – as the track enters the vast-sky country of the Fens. This is a waterland where arrow-straight dykes and drainage channels have reclaimed fields of black soil. But it’s a year-round battle between the two – after heavy rainfall huge lagoons and meres reappear across this low-lying area. Fortunately, the cycle trail is on a raised bank.

Bronze Age settlers also understood the to-and-fro of waters at this ancient causeway, grazing their flocks here in summer before heading to higher ground in winter. At Flag Fen, a very short pedal from the route, a fascinating museum re-enacts what a Bronze Age village may have looked like. You’ll appreciate your light, airy, warm and dry caravan all the more after visiting! Heading back to Peterborough the route crosses the Nene via a stylish pedestrian bridge, and then provides a flat, level asphalt trail into town, from where it’s simply a question of retracing your steps back to Ferry Meadows. 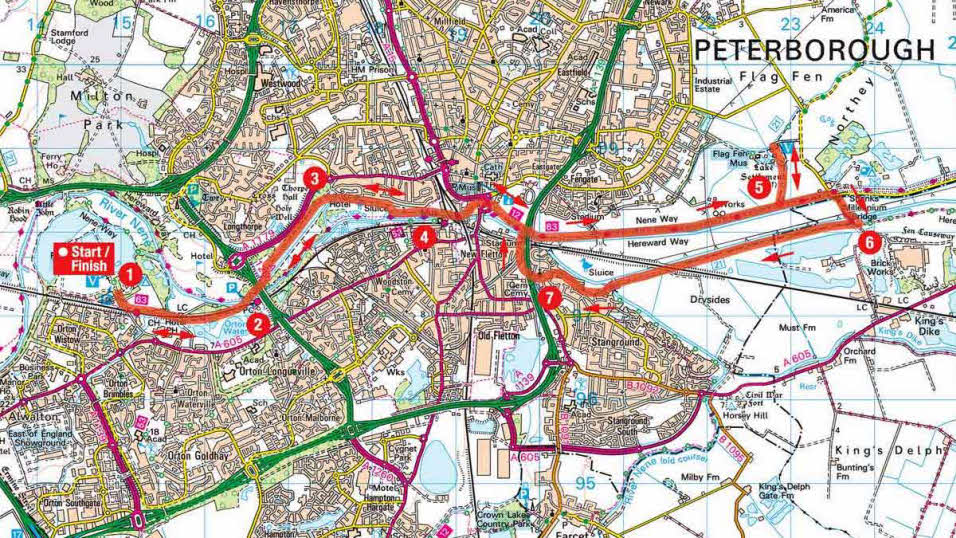 1 Turn right out of Ferry Meadows Club site and in 180m, immediately before the level crossing, turn left, signposted to Station, Orton Mere and City Centre. Continue along this track and in about 600m follow it as it turns right to cross the railway line, then turn left, signposted to Orton Mere and City Centre. Continue to a car park then follow the left track to a crossroads in the tracks.

2 1.8km – Turn left, following National Cycle Network (NCN) 63, signposted to Thorpe Meadows, Longthorpe and Bretton, crossing the railway line and river in quick succession. On the far side of the river turn right and follow the track. Then turn right, following NCN 63 to ride alongside Peterborough Rowing Course, with the water on your right.

3 3.4km – At the end of the lake follow the NCN 63 sign right, passing to the right of The Boathouse pub. Continue to a T-junction and turn right, over the bridge, signposted to City Centre, and on the far side turn left immediately. Keep following signs to the City Centre, eventually picking up the towpath again as it passes below three railway bridges.

4 5.3km – Turn left immediately after the third bridge and in 10m (at back of Asda), turn right and follow the road as it bends to the left. Opposite the back of Iceland turn right between two buildings and on the far side head diagonally left to go through the underpass, joining NCN 12. Emerge to find a car park on the right. At the end of the car park turn right and follow Embankment Walk to the left of the Key Theatre. Keep going to reach the towpath with the Nene on your right. Follow the river for 3.5km, looking out for a sewage works on the left.

5 9.5km – About 500m after the waterworks turn left, following NCN 21 down the bank, across a pedestrian bridge, and along a track for 800m to Flag Fen. After your visit retrace the route to the river, and turn left along the towpath, signposted to Whittlesey. In about 500m, at the pedestrian bridge, turn right and cross the river. Keep on the track to cross a drainage channel, then climb a short bank to a crossroads of tracks.

6 12.2km – Turn right at the crossroads, following the ornate waymarker to Stanground and City Centre, joining NCN 21. At the end of the track keep ahead, signposted to Farcet and City Centre along NCN 12, with a broad patch of grass on the right. When you reach the road turn right and follow North Street around to the left, passing the Woolpack Pub. Stay on this road as it bends to the left and becomes Mount Pleasant, and then bends right along Church Street. Look out for the church.

7 16.9k – When Church Street bends 90° left, turn right instead towards the church, follow the track into the underpass, then turn right immediately. The track eventually becomes a raised cycle lane alongside a busy road. Cross the River Nene then turn left immediately, down a steep bank, to reach the towpath with the river now on the left. From here it’s simply a question of retracing your tyre tracks, following signs to Thorpe Meadows, then Ferry Meadows back to the Club site