Cycling the perimeter trail of a reservoir comes with the guarantee of a good ride. The traffic-free tracks are typically well cared for, sunlight sparkles on the water, and there’s an abundance of wildlife. Grafham Water, England’s third largest reservoir, is no exception to this rule. It’s barely five minutes by bike from the Club site, and offers a varied nine-mile ride around its shoreline, taking in nature reserves and woodland, as well as magnificent views over the reservoir.

This route capitalises on all of those trump cards and adds a couple of its own, extending the ride to explore quiet local bridleways.

These extra miles are properly off-road, so you’ll need a gravel or mountain bike, and they can be muddy after heavy rain. But in spring and summer when colour has returned to trees and hedgerows, this extension is a real treat, offering peace and solitude when the track around the reservoir can be busy with other cyclists and walkers.

The added loop also passes the Wheatsheaf in West Perry, a small country pub with a pretty beer garden; and runs very close to The Grafham Trout, in Grafham, a community-run pub in what looks like a fancy wooden shed, with a village shop next door if you fancy a snack after your pedalling efforts.

The highlight of the ride, however, is the stretch of track along the northern shore of the reservoir, where fleeting views of the water eventually give way to a nature reserve and then the woodland of Savages Spinney and Littless Wood. 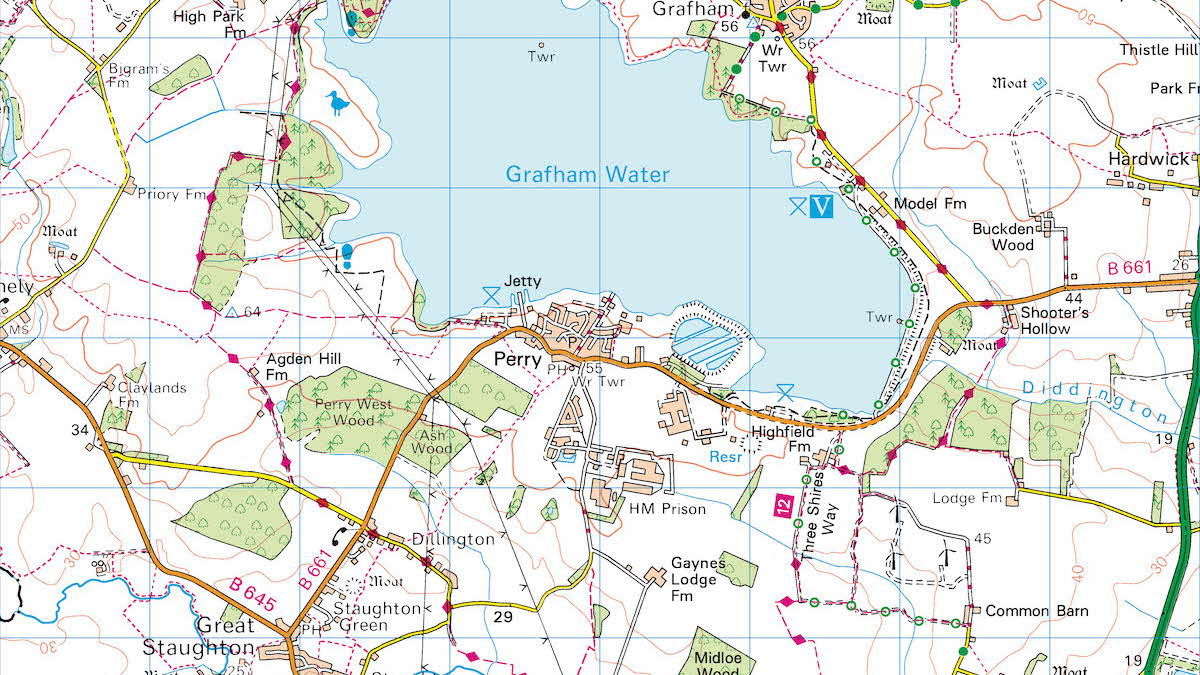 2. 2.5km - Ride through Savage’s Spinney and keep on the clearest, widest track around the reservoir for almost 6km. In places it diverts slightly away from the water, before returning close to the shore at Mander Park, next to the sailing club, where there is a café. Continue to a T-junction with a road.

3. 8.3km - Turn left at the road into West Perry, and immediately after passing the Wheatsheaf pub on the right, turn right along Crow Spinney Lane, signposted to Littlehey. In 700m, when the road bends 90 degrees to the left, go straight ahead along the quiet lane (the security fence around HM Prison Littlehey soon appears on the left). Continue to a T-junction with Cage Lane.

4. 11.4km - Turn left at the T-junction, and in less than 100m, when the road bends 90 degrees to the right, leave the Tarmac and go straight ahead along the bridleway. Continue ahead along this grassy, muddy track for 1.5km to reach a field corner with a large dead tree in the hedgerow. Turn left here, staying on the bridleway, and in 200m follow the bridleway as it turns 90 degrees right. Continue ahead, passing a farm on the left, and at the end of the woodland turn left, soon crossing over the drive to the farm and picking up the Three Shires Way. Follow this track around field edges to reach a three-way junction.

5. 15.5km - At the junction with National Cycle Route 12 (51) take the left fork, keeping the wind turbines on the right, and stay on this track as it heads towards a few houses. Turn right in front of the houses, keeping on the bridleway, and stay on NCR 12 as it passes a field of solar panels to reach a road.

6. 16.9km - Go straight across the road and follow the track around the edge of woodland to reach the perimeter trail around Grafham Water. Turn right along this trail, soon crossing the dam at the end of the reservoir. Keep on this track to reach Marlow Park, where there’s a café and a Rutland Cycling shop. Stay on the trail, with the reservoir to the left and car park to the right. It soon leaves open ground to pass through woods, before reaching a gate on the right with a Tarmac road.

7. 20.2km - Turn right along the road, following the green Cycle Trail sign, and continue to a T-junction in Grafham Village. Turn left at the junction, and in 500m the drive to the Club site is on the right.