This five-mile circuit through York hugs the River Ouse, steering clear of traffic for most of the way, while serving up spectacular views of the city

If cycle rides were measured in bangs per buck, it is hard to imagine a route that delivers more attractions in such a short distance than this loop through York. The directions take advantage of the superb riverside towpath to follow the slow-flowing River Ouse both upstream and downstream, keeping riders out of traffic for most of the way.

By crossing the river four times, the ride serves up fabulous perspectives of some of York’s finest features, including the Minster and Clifford’s Tower, part of William the Conqueror’s original York Castle.

There’s also the chance to take very short diversions to the 19th century Museum Gardens with its medieval ruins and fine Tudor Hospitium, and the National Railway Museum, which sit on opposite sides of the Ouse.

The river itself has the mind-calming effect of all major waterways as it winds its leisurely way to the Humber Estuary, and only the formidable flood defences along its banks hint at its darker side.

In summer, the upstream floodplains of Clifton Ings (beyond Homestead Park) are awash with wild flowers, where reed buntings and meadow pipits take to the air. Downstream, the benches on the traffic-free Millennium Bridge provide a wonderful vantage point from which to gaze back along the river towards the city (although The Perky Peacock café by the York City Rowing Club would be my recommended stop).

If there are rides for exercise and rides for entertainment, this route is firmly in the latter’s camp – a brilliant way to explore a city by bike.

NB The construction of flood alleviation works means the first stretch of this ride is blocked until March 2022, and you will need to follow a traffic diversion to reach Point 2. 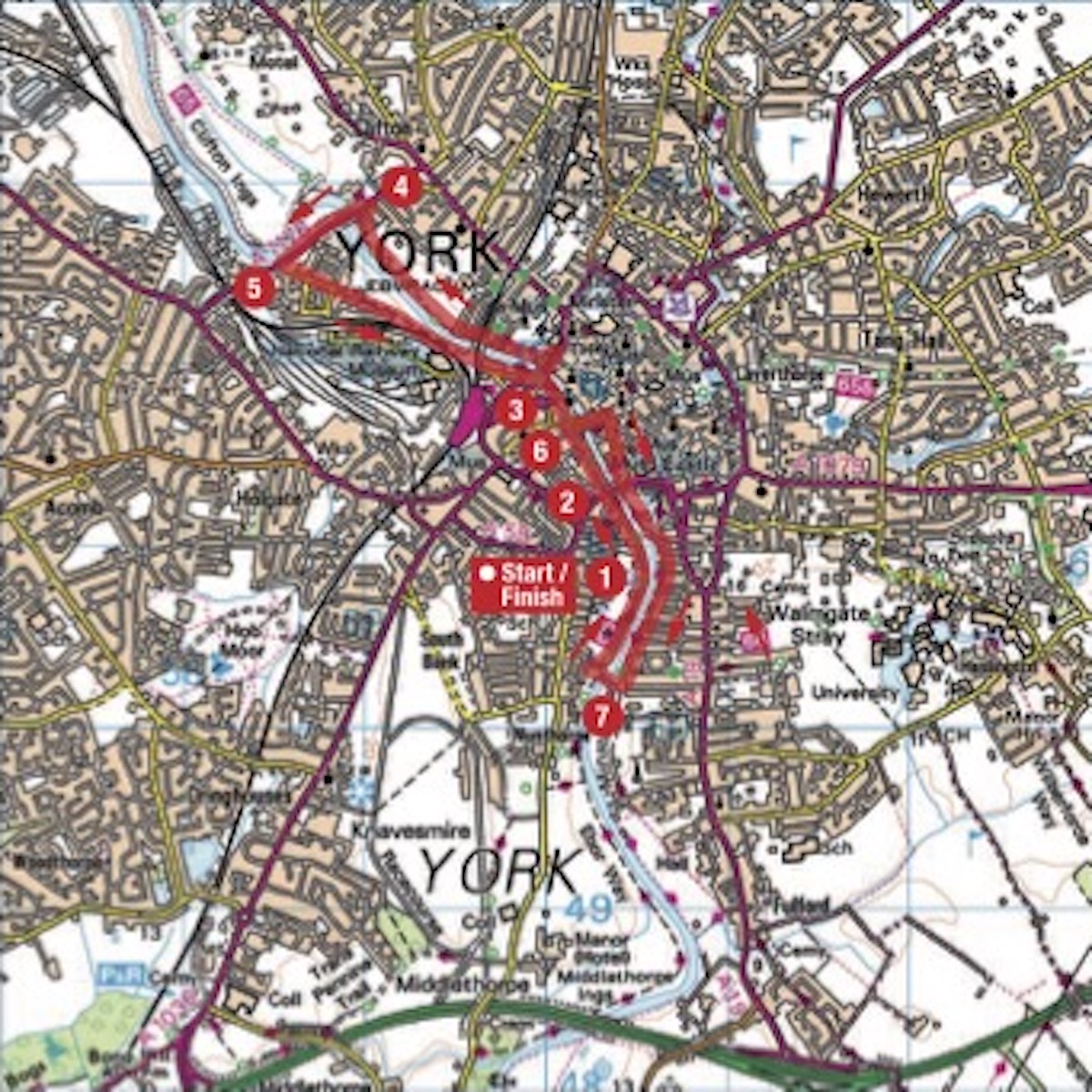 1 From York Rowntree Park Caravan Club site, turn left along the road and continue along the towpath with the river on the right. Pass under the first bridge and keep ahead as the track leads up to a road.

2 0.5km - Turn right along the road and carry on along Skeldergate, signposted to City Centre, Station and National Railway Museum. Continue to traffic lights and a crossroads. Go straight across onto North Street, passing the Park Inn on the right. Keep going until you reach a bridge.

3 1.2km - Follow the ramp up the bridge and cross the river, then turn left by the gates to the Museum Gardens (worth a tour on foot) and head back on yourself down the cobbled street to reach the river. Dismount as you join Dame Judy Dench Walk, before getting back in the saddle as the towpath widens. Continue with the river on the left, passing under a railway bridge, to reach another bridge in about 1.6km (1 mile).

4 2.8km - At the bridge, follow the signs right to Homestead Park and Youth Hostel, up the ramp, and at the top turn left to cross the river. There is a cycle path on the far side of the river. Keep going to the traffic lights located at the first road on the left.

5 3.4km - Turn left along Salisbury Road, which becomes Salisbury Terrace. Continue straight ahead along Jubilee Terrace (ignoring Kingsland Terrace), and keep going with the river to your left. Immediately after the next bridge there are signs to the National Railway Museum if you want a detour. If not, continue ahead, passing York City Rowing Club before riding under the next bridge. Keep on this road (North Street) to the next set of traffic lights (Sainsbury opposite).

6 5.9km - Turn left at the traffic lights, crossing the bridge, and follow Clifford Street around to the right. When you see Clifford Tower high up to your left, turn right into Tower Gardens, follow the cycle path down to the river, and turn left so the Ouse is now on your right. Ride under the bridge and in 400m cross the small, blue pedestrian bridge, before continuing with the river on your right. Keep going until you reach the Millennium Bridge.

7 7.3km - Cross the Millennium Bridge, then turn immediately right to follow the road alongside the river that leads back to the Club site.